Library Park in Carnegie Borough to be Enhanced 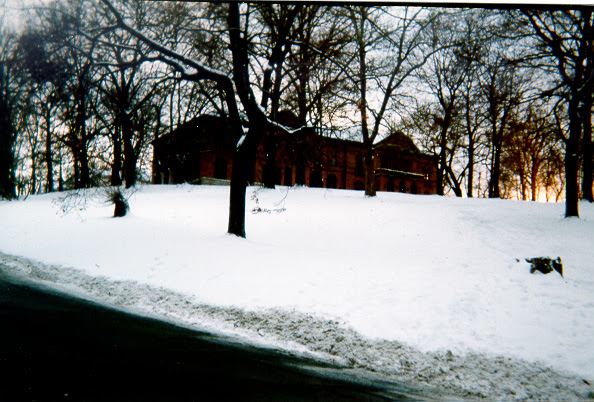 Photograph of the Andrew Carnegie Free Library and Music Hall at the top of Library Hill
within Library Park, which overlooks the business district of the Borough of Carnegie, Pennsylvania. During the Winter months, as pictured here, neighborhood children often sled-ride in
Library Park.
(Image Source: History of Andrew Carnegie and Carnegie Libraries Internet Web Site; Photographer: Lynne S. Walsh)

After several years of rehabilitating the historic Andrew Carnegie Free Library and Music Hall building in the Pittsburgh suburb of Carnegie, Pennsylvania, Library management has announced plans to enhance Library Park. Library Park consists of part of a large hill (known as Library Hill, with the Andrew Carnegie Free Library and Music Hall at the top of the Hill), which overlooks the business district of the Borough of Carnegie.

Upon the opening of the Andrew Carnegie Free Library and Music Hall on 1901 May 1 (the cornerstone was actually laid in 1899), the Library Foyer includes a plaque which reads ---

Over more than a century, Library Park has been a grassy and partially wooded hill, the only green space in the center of busy Carnegie Borough. Library Park has been the host of several public events over the years, including encampments of Civil War re-enactors (affiliated with the Library's historic Civil War veterans' post museum) and even a public viewing of a Partial Eclipse of the Sun on 1998 February 26 (one of only two sites in Allegheny County for such a public viewing, and the only site outside of the City of Pittsburgh).

The center of the enhancements to Library Park would be a new paved pathway from the Library, down the hill to the corner of Broadway and East Main Street, near the center of the Borough's business district. Actually, the sidewalk / plaza area along Broadway at Main Street (which, legally, is part of Library Park) was rehabilitated by the Borough several years ago; so this area would not be included in this new proposal.

The proposed pathway through the Park to Main Street would provide easier access to parking lots in the business district, for people attending Music Hall events. Vehicle parking for events in the Music Hall has always been limited at the top of Library Hill, although there has never been a problem with parking for people who regularly visit the Library.

A children's play area is one of the ideas being considered for Library Park. In the late 1990s, the Library's Board of Trustees attempted to obtain children's playground equipment from a Burger King in Greenfield, which was closing. This attempt was not successful.

Although two Borough-maintained benches exist along the sidewalk of the Beechwood Avenue entrance to Library Park, additional benches along the new walkway through the Park have been proposed. Better lighting, landscaping, sculptures, and, perhaps, even a plaza area are being considered for Library Park.

A $35,000 grant from the Allegheny Foundation is helping to fund the design concept for Library Park enhancements. The design concept is being formulated by LaQuatra Bonci Associates of Pittsburgh.

A community meeting at the Library, at the beginning of this month, allowed community members to provide public input into the Library Park plan. A possible design concept, with a proposed budget for the improvements, is expected to be available next month for consideration by the Library's Board of Trustees. Then, fund-raising for the project can begin.

Cherry, Bobby. "Work to create Library Park in Carnegie set to begin."
TribLive.com: Tribune-Review, Pittsburgh 2017 June 3.
Improvements to Library Park, at the Andrew Carnegie Free Library and Music Hall in the Pittsburgh suburb of Carnegie, Pennsylvania, are about to begin.
Link >>> http://triblive.com/local/carlynton/12361742-74/work-to-create-library-park-in-carnegie-set-to-begin