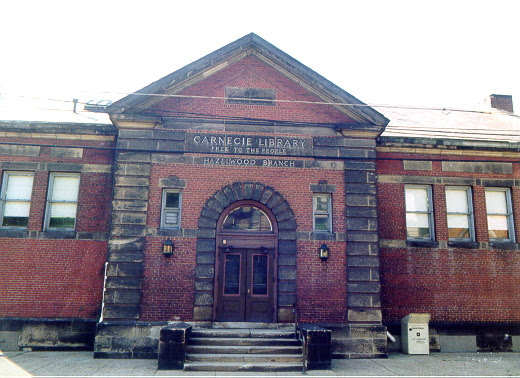 The original building of the Hazelwood Branch of The Carnegie Library of Pittsburgh,
which opened in 1900 as the fourth neighborhood library branch in the first multi-library
Carnegie Library system.
(Image Source: History of Andrew Carnegie and Carnegie Libraries Internet Web Site; Photographer: Lynne S. Walsh)

The Carnegie Library of Pittsburgh had abandoned the historic building, in favor of a downsized library branch on the second floor of a new retail building, on 2004 March 13. On 2004 July 14, the historic Hazelwood Library branch building, along with four other historic library branches (West End, Mount Washington, Lawrenceville, and Homewood), received a unanimous vote from the Pittsburgh City Council naming each of these five buildings as a "City-Designated Historic Structure."

Should such a sale occur, the people of Pittsburgh, and particularly the people in the Hazelwood neighborhood, will no longer have any influence in the use, or disuse, of this historic property. This building includes a large auditorium, which has been used for community events for more than a century.

Long-time library advocate Glenn A. Walsh, has taken-issue with such a sale. Mr. Walsh served as a Life Trustee on the Board of Trustees of the Andrew Carnegie Free Library and Music Hall in Carnegie, Pennsylvania from 1995 to 2000. Since 1999, he has been the Web Site Administrator for the History of Andrew Carnegie and Carnegie Libraries Internet web site.

On 2016 July 20, Mr. Walsh addressed his concerns before the Council of the City of Pittsburgh, with the following public statement:

Good morning, I am Glenn A. Walsh, 633 Royce Avenue, Mt. Lebanon. Today I am speaking as a private citizen representing no organization.

I support reuse of the historic Hazelwood Library building, including the large auditorium. However, I oppose Bill 614 which would allow the City of Pittsburgh to sell-off the historic structure.

Bill 614 specifically states: “…conveying AS IS all of the City's right, title and interest, if any, in designated City-owned properties to the Urban Redevelopment Authority of Pittsburgh ("URA") for consideration of $1.00 each…” Once this conveyance occurs, the City of Pittsburgh, and the people’s duly-elected representatives in this Council, no longer have any control over what happens to the building.

If the building is sold to a third party, there is no guarantee that the structure will be reused for the benefit of city residents. This third party may make all types of promises, but after obtaining the building and learning how much it will really cost to rehab the structure, they may give-up and the building will sit empty for many more years.

In a recent Post-Gazette article, Councilman O’Connor expressed an interest in starting a “community conversation” about the future of the Hazelwood Library building. Let the petitioned public hearing be a beginning of this community conversation. Mr. President, I respectfully ask that you schedule this public hearing in the Hazelwood neighborhood.