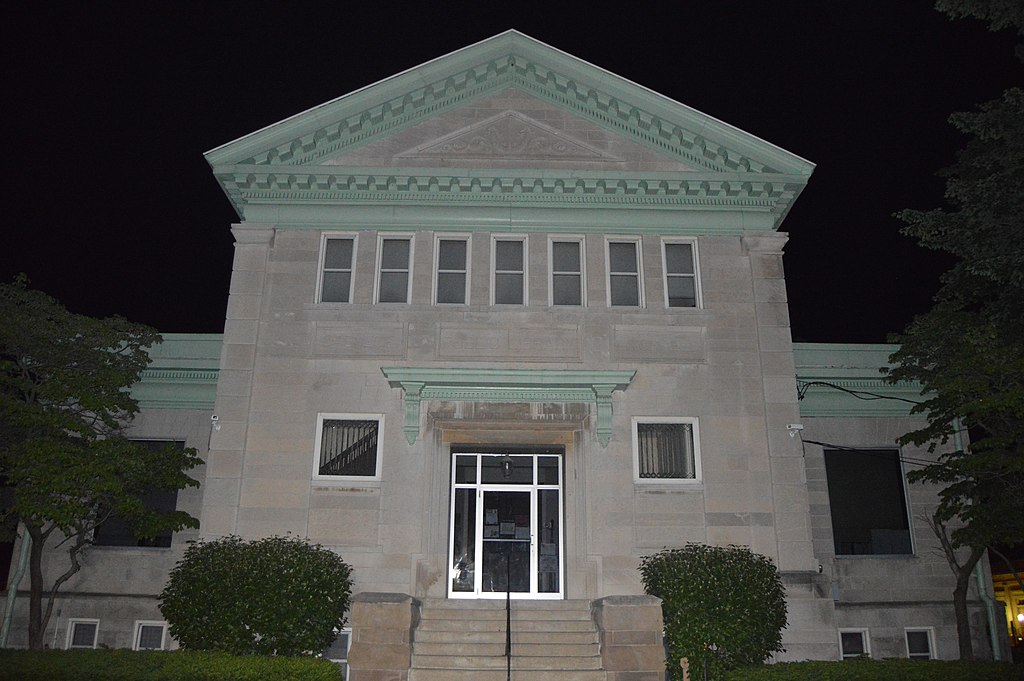 In 1903, Andrew Carnegie provided Litchfield, Illinois with $15,000 for construction of a public library. (Image Sources: Wikipedia.org , By Nyttend - Own work, Public Domain, https://commons.wikimedia.org/w/index.php?curid=33184881 )

In July, the Litchfield, Illinois Public Library District announced plans to construct a new library building near the south edge of town, which would replace their historic Carnegie Library building in the town square, called Library Park, in the center of town.

One of the earliest Carnegie Libraries to be constructed, Andrew Carnegie provided the City of Litchfield with $15,000 to build a public library in 1903; the Library opened to the public the following year. A renovation of the Library in 1999 made the historic structure handicapped-accessible, including the addition of an elevator.

After looking for property for a new library building beginning in November, the Library's Board of Trustees purchased a site near the Litchfield Community Center in February. Evan Lynch Associates of Springfield, Illinois, which assisted with the previous two renovations of the current Carnegie Library building, was hired to help plan the new building. However, only last month was there public awareness of plans for a new library.

The new building is expected to have 12,000 square feet, all on one floor; the current Carnegie Library building has 6,900 square feet on three floors. According to Litchfield Public Library District Librarian Sara Zumwalt, through savings and donations, the library has already enough money for a down-payment on the new building; a bank loan would provide the rest of the money for the project. She insists that this project will not require a tax increase.

In the July 7 issue of The Journal-News of Montgomery County, Illinois, Ms. Zumwalt claimed that the current Carnegie Library building is running out of space. She said, "We're just out of room. We have books sitting on top of books. We are always moving stuff around to try and make more room. But we are full."

However, she also made the erroneous statement that because the historic Carnegie Library is “listed on the Historic Registry so we can't build on." Actually, a building listed on the National Register of Historic Places cannot receive Federal funds if the historic building is demolished and another building constructed on the same site. Additions are permitted, provided the proposed addition is reviewed and approved by the appropriate state and Federal historic agencies.

Long-time library advocate Glenn A. Walsh, who served as a Life Trustee on the Board of Trustees of the Andrew Carnegie Free Library and Music Hall in the Pittsburgh suburb of Carnegie, Pennsylvania from 1995 to 2000 and who authors an Internet web site on the History of Andrew Carnegie and Carnegie Libraries, commented on this matter in a Letter-to-the-Editor published in the August 15 issue of The Journal-News:

Additions To Historic Libraries Are Permitted

Litchfield Mayor Steve Dougherty is completely correct when he says that additions to historic structures are permitted. Two very prominent examples of such additions are large, multi-story additions built behind and adjacent-to the historic Carnegie Libraries in both Louisville, KY, and Columbus, OH.


In fact, both federal and state funds can be used for such additions; such funding is just prohibited if the historic building would be demolished and another building constructed on the same site. State and federal historic agencies would simply need to review and approve the construction of an addition to a building listed-on, or eligible-for, the National Register of Historic Places.

I strongly urge city and library officials to seriously consider building an addition to this historic Carnegie library.

Herschelman, Kyle.
"Litchfield Pot Vote To Be Left To People."
The Journal-News, Hillsboro IL 2020 Aug. 10. First retrieved 2020 Aug. 14.
In other business, the council approved a resolution to include compensation paid under an internal revenue code section 125 plan as IMRF earnings retroactive to Dec. 1, 2018, approved the start of the condemnation and demolition process for the properties at 220 and 222 North State Street, approved a custom glass privacy wall system for the Carnegie building from Egyptian Workspace Partners for an amount not to exceed $16,140.26 and approved the renewal of an advertising contract with Meredith Media for a sixth of a page vertical ad in the biannual Travel Illinois Magazine for an amount not to exceed $2,000.
The former Litchfield library building will be utilized by the Litchfield Tourism office and the Litchfield Chamber of Commerce. The main floor will house the two offices, while the basement will be used for storage. For the time being, the upper floors will remain closed.
Link >>> https://www.thejournal-news.net/stories/litchfield-pot-vote-to-be-left-to-people,70530

Herscelman, Kyle. "Litchfield Approves New Officer, Fire Chief."
The Journal-News, Hillsboro IL 2019 March 1.
Among those items were approval of an amendment extending Grand Rental’s agreement with the city for boat rental services at Lake Lou Yaeger, approval of an advertising contract with “On Route 66 for the First Time” for $1,000, and the renewal of the service maintenance agreement with ThyssenKrupp for a term of five years for service of the elevator at the Litchfield Carnegie Library building.
Link >>> http://www.thejournal-news.net/stories/litchfield-approves-new-officer-fire-chief,64400

Herschelman, Kyle. "Possible Ban Draws Ire of Litchfield Hunters."
The Journal-News, Hillsboro IL 2017 Sept. 11.
Mayor Dougherty also created a buildings and grounds ad hoc committee to investigate ways the current Litchfield Library building can be put to use once the current library moves out. Aldermen Ray Kellenberger, Tim Wright and Mark Brown would be added to the committee, with Mayor Dougherty saying that members of the public would be added as well.
Link >>> http://www.thejournal-news.net/news/local_news/possible-ban-draws-ire-of-litchfield-hunters/article_41d1a6da-96a0-11e7-b783-a3aa080ed346.html